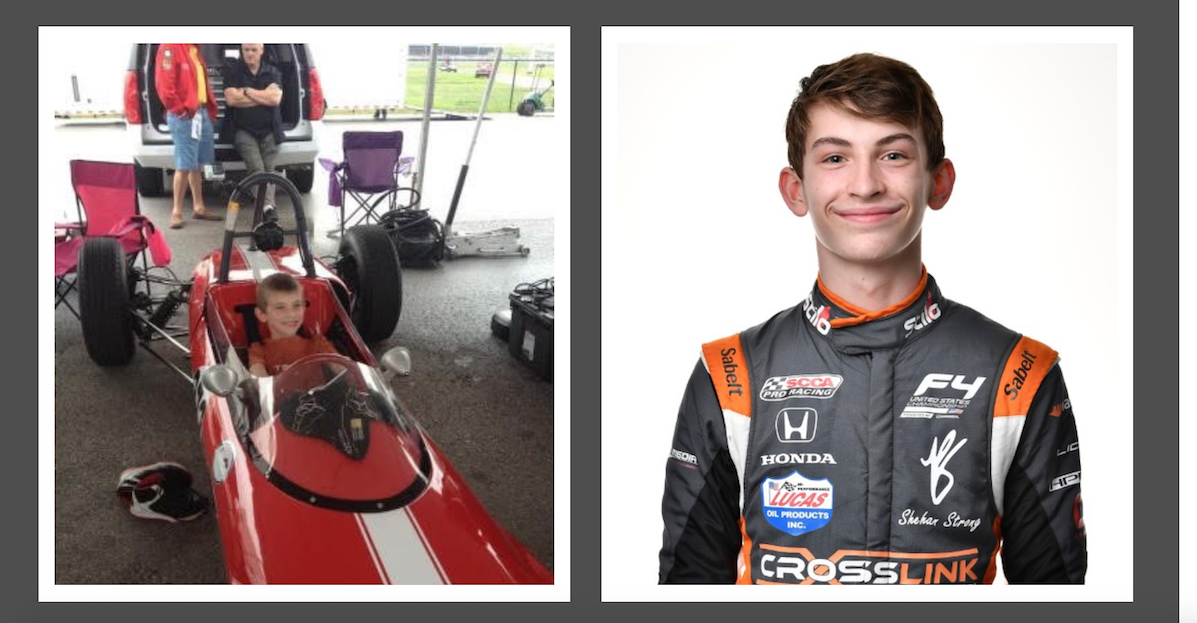 Growing up in Austin, I’ve been exposed to many different things I now love. Tex-Mex, music, and most importantly, motorsports. In 2013, at the age of 8, I attended my first SVRA (Sportscar Vintage Racing Association) event at the Circuit of the Americas (COTA). Being able to get up close and personal with race cars from almost 100 years of the sports history made me instantly fall in love with all things racing.

A little under a year later we bought my first race kart from a local family and started to run local and regional races all around my home state of Texas, winning numerous races and championships along the way. In 2017 I moved to higher-level national kart races that were held around the country. The best of the best raced here and I was determined to make my mark. Progressing through the karting ranks and classes, and eventually joining Crosslink Competition, my experience, knowledge, and opportunities grew, even getting to race abroad at the famed Le Mans circuit in France in 2019. While keeping up with travel, racing, and school, I also established a new business, Ryan Shehan Racing, to help fund my career and to make my partners dollar really count.

In January of 2020 my life was turned upside down after a near death incident caused by brake failure during testing for kart race in Homestead, Florida. While I was in a coma the doctors told my parents and coaches that I had a traumatic brain injury and would never drive again. Luckily my condition improved enough to be awake and alert just a few days after the incident, although still quite dazed and confused. Even in this state, I still asked when the next race was and proclaimed (still very confused and on countless painkillers), “Well I’m bleeping doing it!” to which I was told “no you’re bleeping not!”, (looking back, that was probably the right call).

With the support of my parents, team, and countless people from the industry, I was back in the seat just nine weeks later, scoring a second place finish my first event back. I kept that momentum going with several more wins and podiums in 2020 and eventually I was given the opportunity to test in Team Crosslink’s Formula 4 car. After a few pirouettes and getting used to the different feel of a car vs a kart, I was able to put down some respectable lap times, enough to have the team offer me a seat for the 2021 F4 United States Championship Powered by Honda. With this comes many new challenges, getting used to the new car, the different weekend formats, among other things, but arguably the most important challenge is learning the business side of racing.

It’s no secret that racing isn’t cheap, the business side of racing is universally known to be the most influential aspect of the sport. You can’t make it to Formula One, IndyCar, or any other top form of motorsport without funds to support your climb up the motorsport ladder. That’s why I started to learn the business side of the sport, to learn what it takes to get the funds needed to make it to the top. With the help of my parents, and several experts, Ryan Shehan Racing has grown to be a one stop shop in motorsports marketing for our partners. Whether it’s social media, brand recognition on the car, or appearing at events, we do what most aren’t willing to when it comes to making our partners proud of their investment.

Join us on Tuesday, October 5 from 5-8 p.m. at Live Oak Brewing Company.