Austin isn’t just a progressive city for people, but for animals too.

The city is home to a plethora of pet-friendly spots including restaurants and a multitude of off-the-leash parks. It’s only in Austin that you will find beloved animals—of all shapes and sizes—slurping on puppuccinos (yes, they do exist) at Starbucks, jogging in the mid-morning around Lady Bird Lake, cultivating their spiritual awareness through yoga, meditating at spas, living in snazzy high-rises, and enjoying the nightlife with their partners in crime.

Yes, Austin very well could be considered the “animal dream” for critters because it’s the one place that strays have the chance to live a long-lasting life in a loving home. Many of these lone strays found their second chance with one local organization—Austin Pets Alive!

Since 2008, Austin Pets Alive! has provided food, housing, and love to more than 40,000 animals in the Central Texas region. They don’t consider themselves your average animal shelter. And why should they? After all, they created an abundance of comprehensive programs—many of which are the first of their kind in the nation—designed to save the lives of animals most in need and were the first to lobby for a no-kill plan in the City of Austin.

Due to their innovative programs and collaborative partnerships, Austin has earned the title as the “Largest No-Kill City in America” and has saved more than 90 percent of animals at risk of euthanasia in the region.

Recently, Austin Pets Alive! won the Blackbaud Non-Profit Award. The accolade, a category of the Greater Austin Business Awards program, recognizes a public charity for their work in the community and partnerships with businesses in the region. Austin Pets Alive! was awarded a $5,000 check from Blackbaud to continue their services in the community. 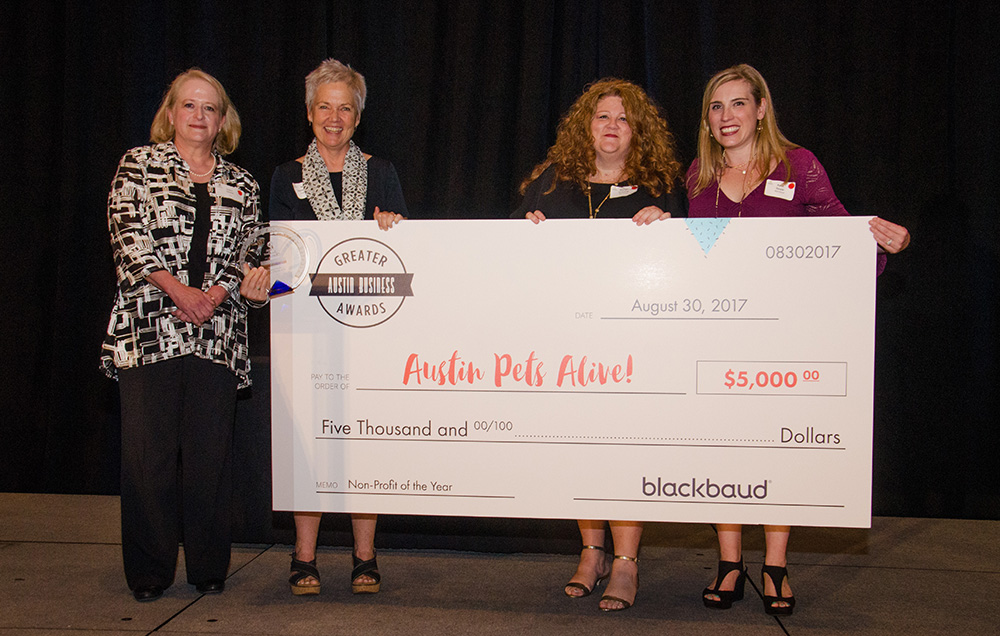 “There are no words to describe how grateful we are to be awarded such an honor. This recognition by the Austin Chamber carries a lot of weight and is further proof of the love and respect this community has for its pet population,” said Anne Helmick-Lyon, Deputy Development Director of Austin Pets Alive!

Since the award ceremony, Austin Pets Alive! mobilized across the state to help with relief efforts in the wake of Hurricane Harvey. The organization has taken in over 2,500 animals directly affected by the hurricane, in addition to the 1,600 dogs and cats awaiting forever homes.

“The scale of our lifesaving efforts around Hurricane Harvey is incredible! We've had to set up a temporary shelter in Houston to account for the animals were still receiving, after having our initial lifesaving hub run out of a parking lot in Katy. We also leased a space on Burnet Road that helped us care for 800 animals, and we tripled the number of dogs we typically have in foster and over doubled the number of cats. Because of the incredible generosity we've experienced, we have also been able to deploy supplies to shelters still in deep need and asking for help. We are so thankful for the continued support of the community because without it, this initiative truly would not have been possible” said Anne Helmick-Lyon, Deputy Development Director of Austin Pets Alive!

For more ways on how you can help Austin Pets Alive!, visit their website here.