Austin has the most robust level of economic and housing activity among U.S. major metros in the second quarter of 2015 according to Thursday’s release of the Leading Markets Index (LMI) by the National Association of Homebuilders (NAHB). 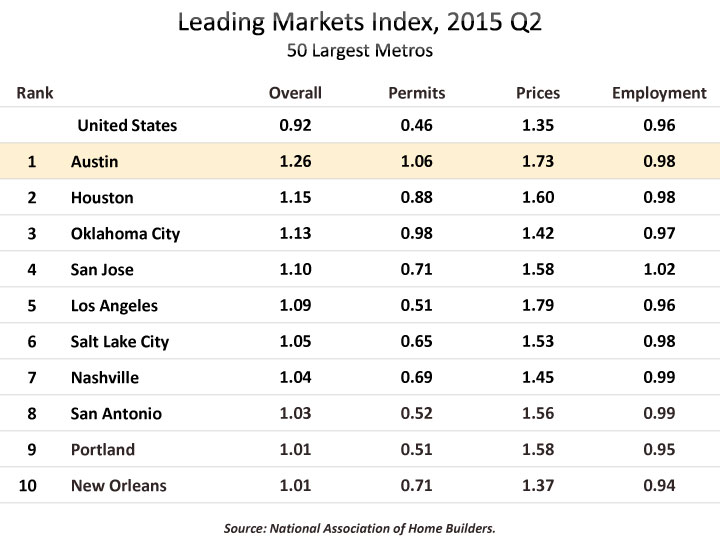 Austin’s score for single-family permit activity is ahead of normal, at 1.06, while the nation is at 0.46. Only 26 of 364 metros have permit activity at or above normal. Of the three elements in the LMI (house prices, permits and employment), the housing permit level has made the least progress toward normality across U.S. metropolitan housing markets. Among the top 50 metros, Austin is the only market with a permit activity score above 1.00. House prices have had the broadest recovery, with 345 markets returning to or exceeding their last normal level. Normal employment levels have been met or exceeded in 64 markets.

In the NAHB’s index, 2000-2003 represents normal for permits and home prices, and for employment, 2007 is the base comparison. In computing index values, permits and employment are divided by population in the current and normal period to account for growth that did take place. 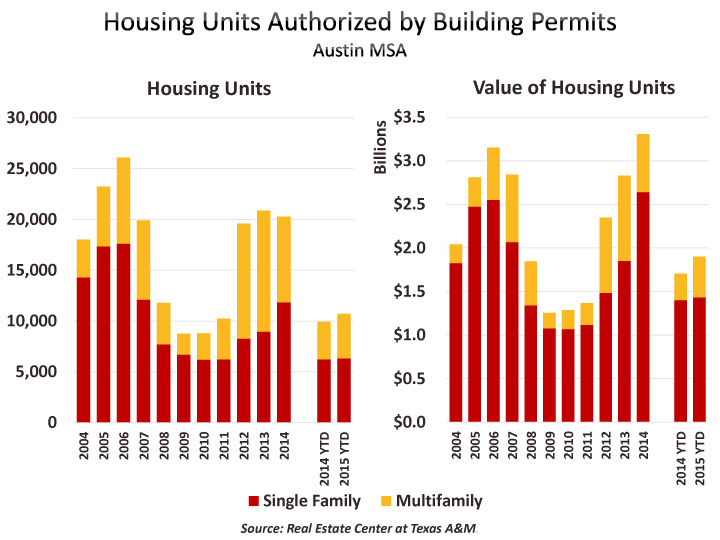 According to data from the Real Estate Center at Texas A&M, Austin’s residential permit activity in the first 6 months of 2015 totals 10,706 units, which is 8.0% above the same period last year. The value of permits is up by 11.4%. What accounts for much of this difference is a substantial increase in the average value of multifamily units permitted. 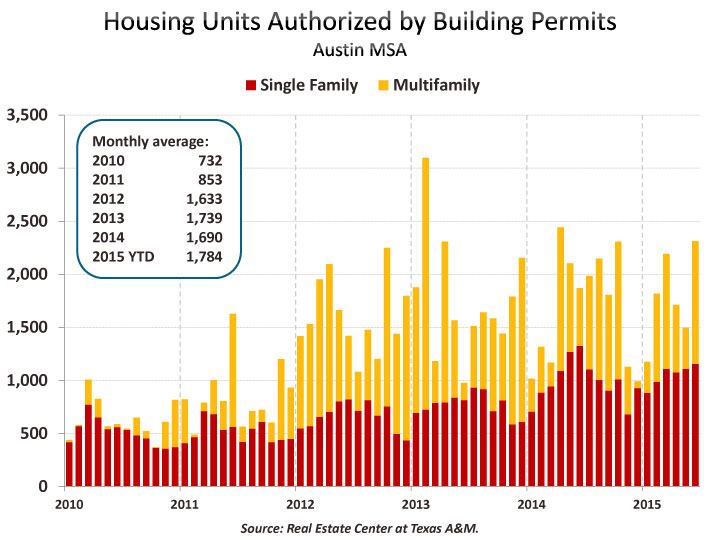 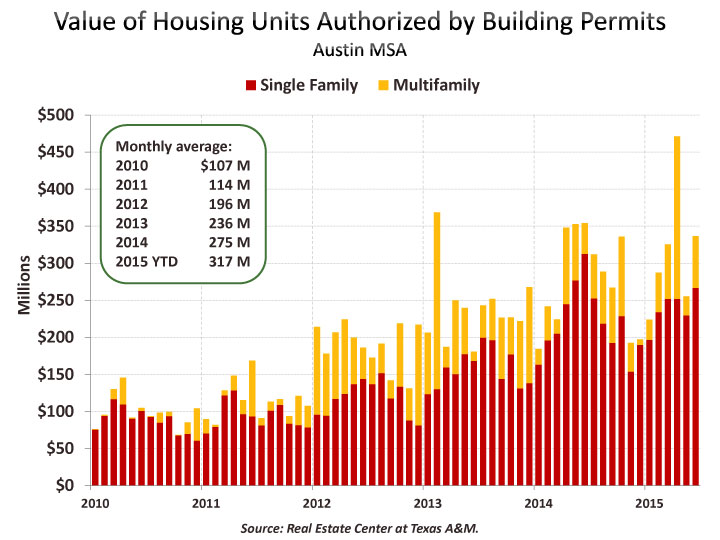 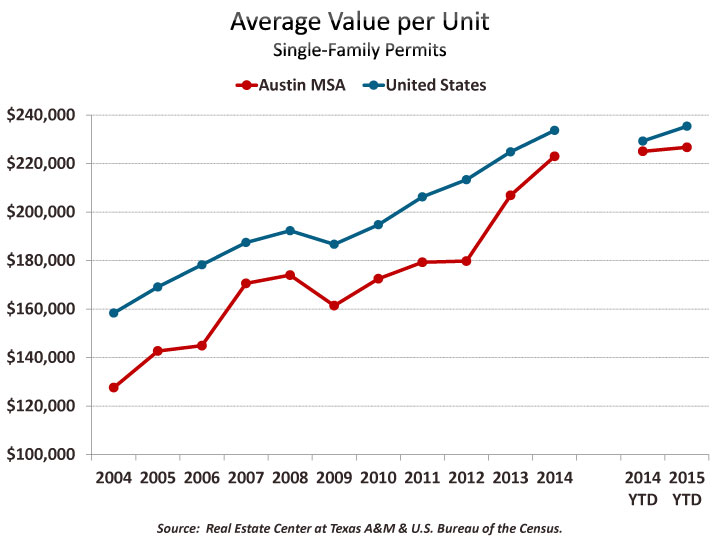 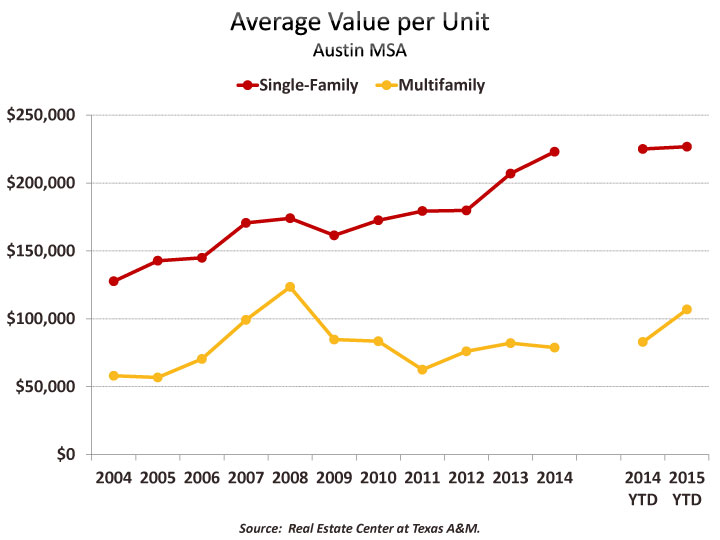 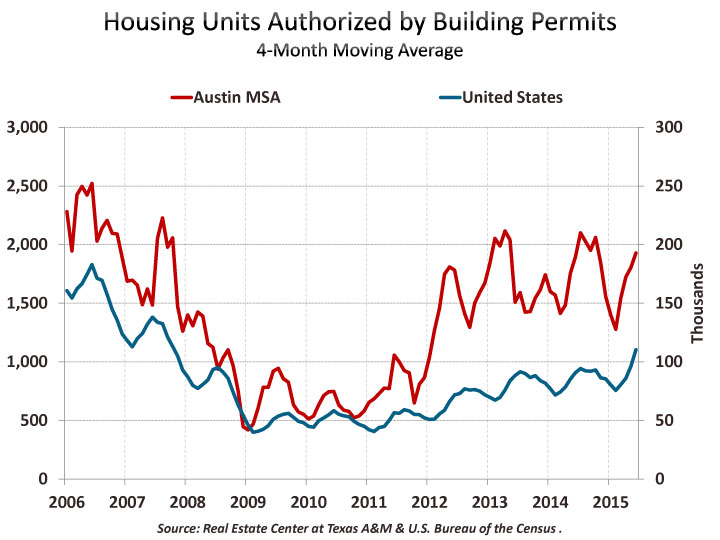 While Austin ranks as the 35th largest metro based on population size, it issued more housing permits in 2014 than all but 8 metros (Houston, New York, Dallas-Fort Worth, Los Angeles, Atlanta, Washington, Seattle, and Phoenix—each among the top 15 largest U.S. metros). In 2015-to-date, Austin ranks 10th for total permits issued, surpassed by the same 8 metros, plus Miami. 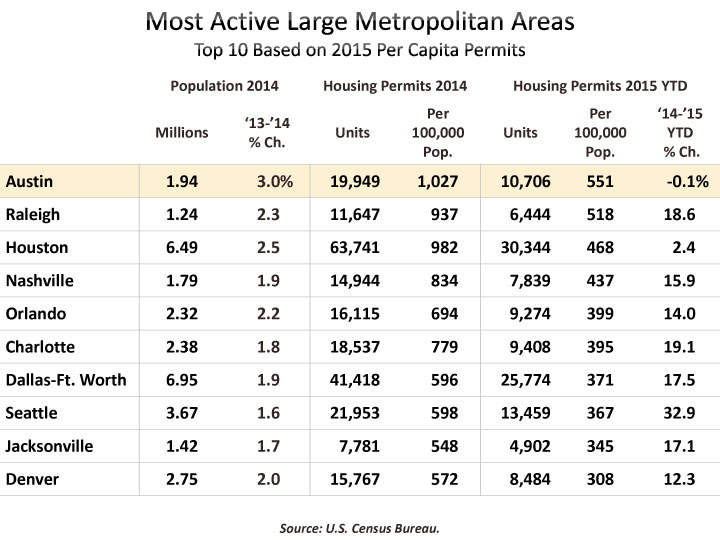 The table above and the graph below look at permit activity in major U.S. metros on a per capita basis. Austin’s 19,949 total permits in 2014 translate to 1,027 per 100,000 population, which was the highest rate of per capita activity among the 50 largest U.S. metros. Austin’s 10,706 permits issued in the first 6 months of this year amounts to 551 permits per 100,000 population and that is also the highest rate among large metros. 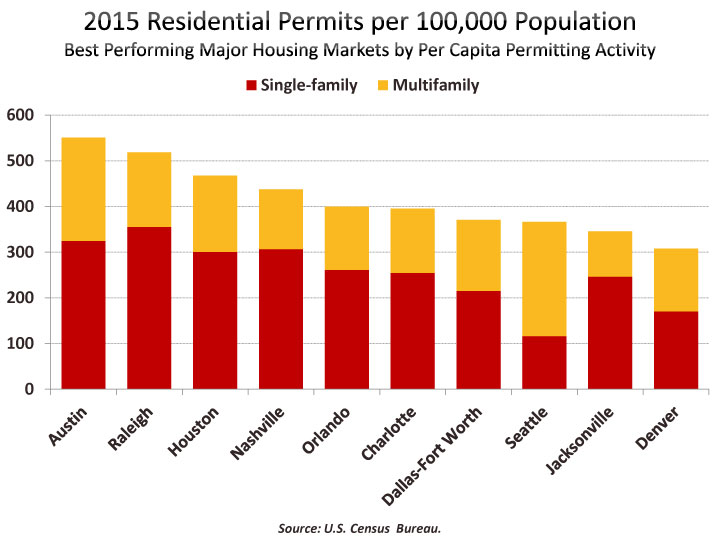 Single-family activity was also higher in Austin than almost anywhere else in both 2014 and in the first six months of 2015. Austin issued the 7th largest number of single-family housing permits among all metros in 2014 (behind only the much larger Houston, Dallas-Fort Worth, Atlanta, Washington, New York, and Phoenix markets). Austin ranks 6th for total single-family permits issued in 2015 (behind the same markets, except New York which fell to No. 10). 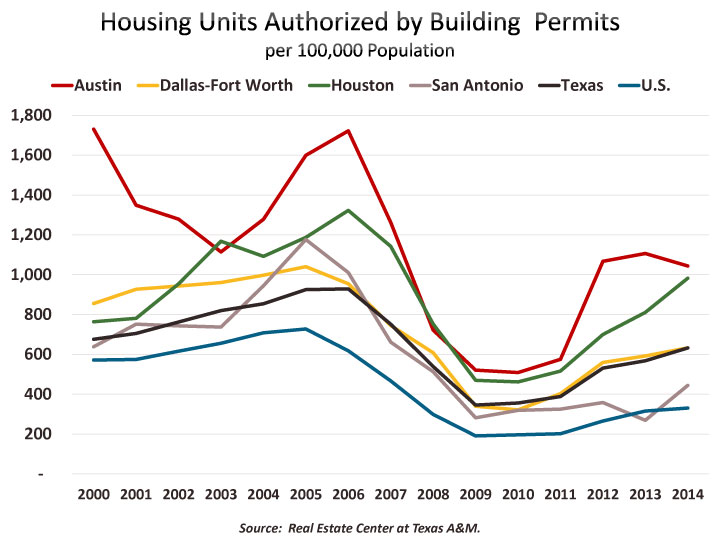 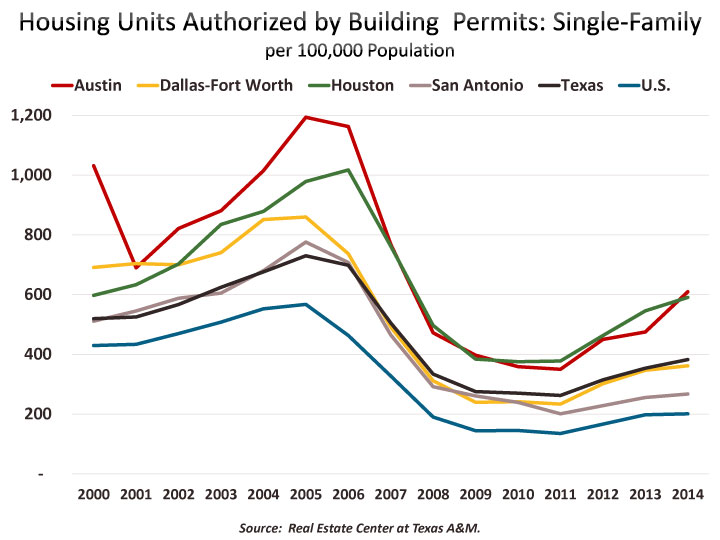 Note: Data on residential permit activity for the Austin metro from both the U.S. Census Bureau and the Real Estate Center at Texas A&M is included in the Chamber’s monthly Economic Indicators files. Data since 1980 is in this Excel file, which is updated monthly.